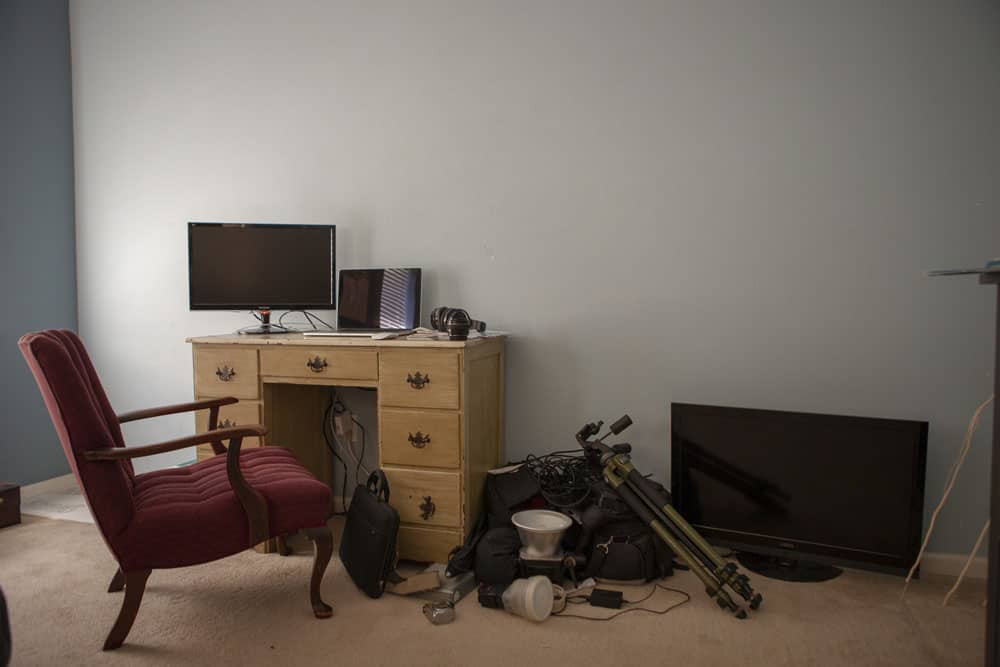 (do y'all even remember field of dreams)

So it became evident to me pretty early on in the Average Joe’s journey that I would need a really good home office to work from if I was going to really give this my all. I’m normally a “don’t ruffle feathers”, “don’t make a fuss” type of guy, however, this was something bigger than I had ever done before and from experience, I knew it had to have a bit more thought and care put into it. Cuddling up on the couch and “building websites” sure sounds great, but I knew it wouldn’t cut it in the long run.


Anyway, It was a little slow going at first, because my office is also my bedroom, and so I had to work with certain restraints of making sure to delineate the spaces while making sure the office portion was still attractive and didn’t upset the aesthetic too much. So at first and for about 2 months, I worked from a hand-me-down desk that was my mother-in-law’s from when she was a little girl. It looked cool albeit small for all of my stuff. I also didn’t have an office chair, but rather a lounge chair that I attempted to make work (it didn’t). So that got the business rolling, however, when it started up in earnest I realized it was time to make a change. I needed an OFFICE, with a DESK (like an adult would have).


Being the handy fella I am, I decided that I’d just build a desk. Especially after looking at prices for the size and style I was looking for. I wanted a large wooden top with some drawers, but mainly just lots of room to spread out my stuff. On top of that, there were some wall things I definitely needed to help me succeed. A way to organize leads, proposals, projects, was a must, as well as some shelving for business books, and inspirational things to keep me going. So I set out to build as much of it as I could, and buy what I couldn’t (preferably on Swip-Swap, or Ikea) 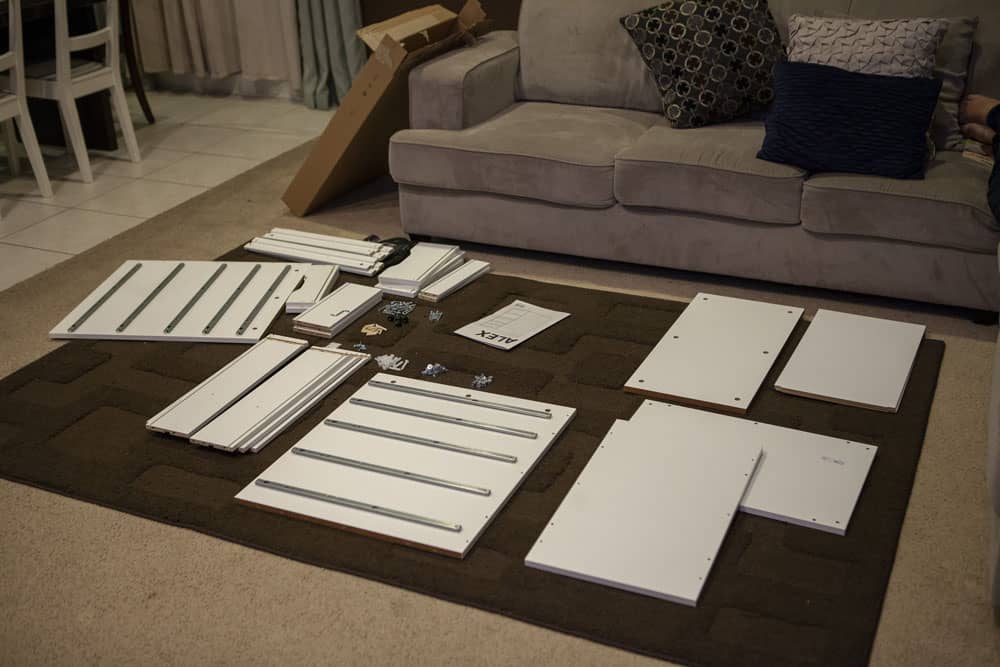 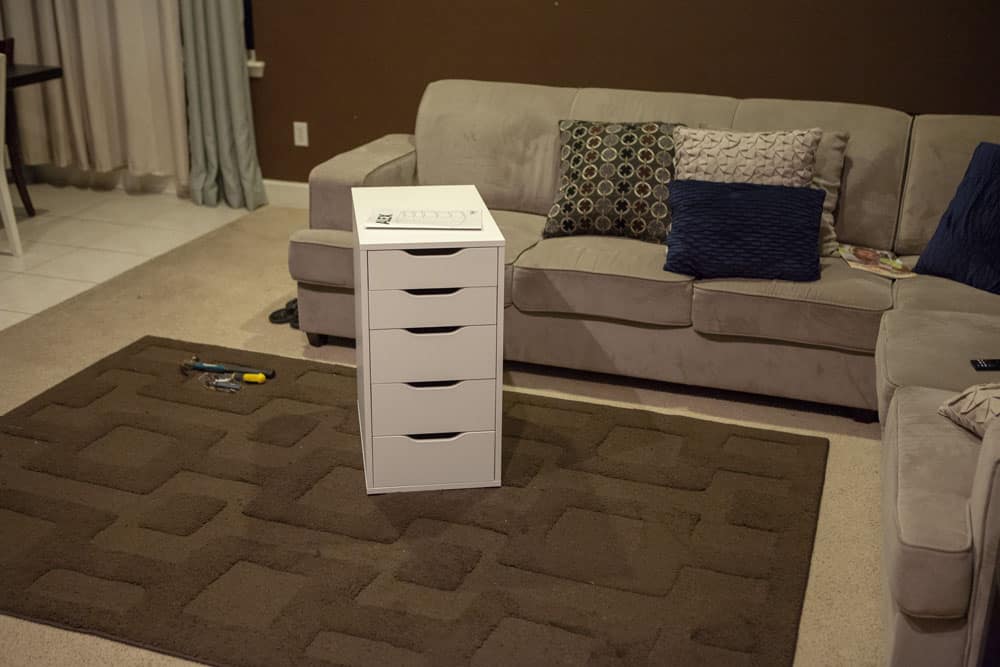 I don’t have a lot of process pics for the desktop, or building the IKEA cabinet so I’ll describe mainly what I did. Amanda and I decided that we had enough wall space to make a large enough desk for her to have some space as well, so we settled on 10ft planks to build the desktop out of. I wanted it to be really deep as well, for plenty of room, so we opted for 1ft x 12ft x 2″ planks that I sanded (forever) and joined with a Kreg joiner. I absolutely love that thing. It really made the job easy. The planks are lined up and screwed together from the underneath side at an angle so it seems from the top once it was stained and varnished to be one 36″ deep 10ft long solid piece of wood. Given that it’s 2″ tall, it looks impressive. I’m sure they sell solid pieces of wood at those sizes, and I can bet it’s pretty pricey. 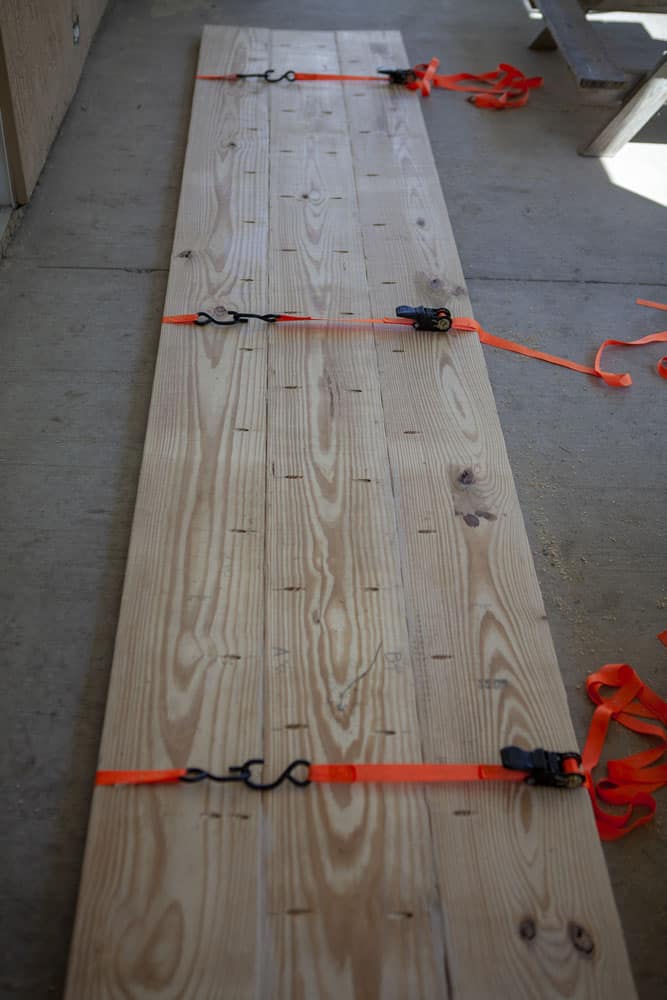 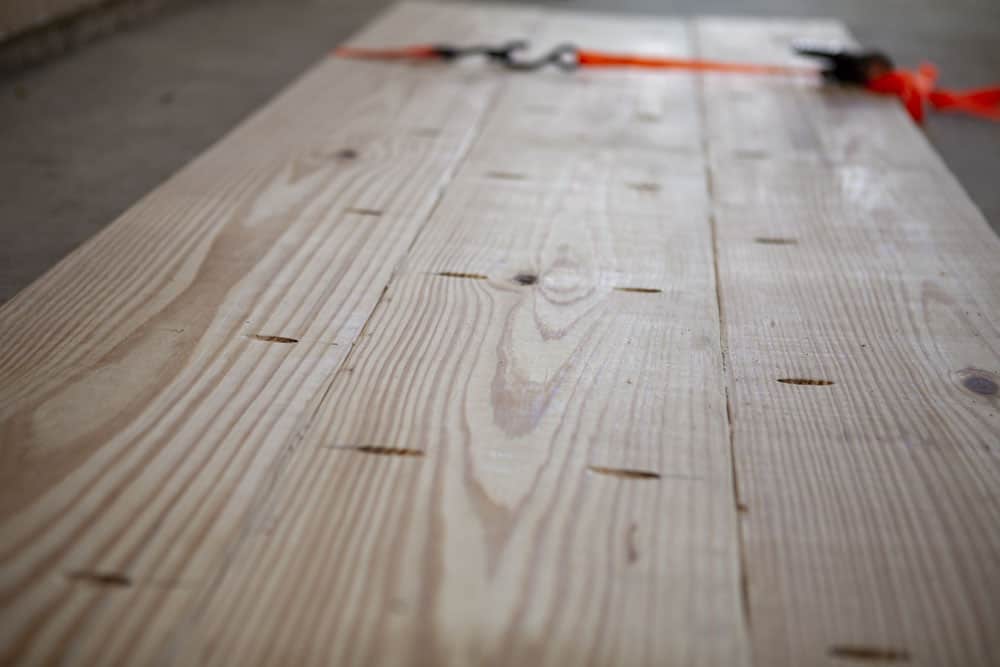 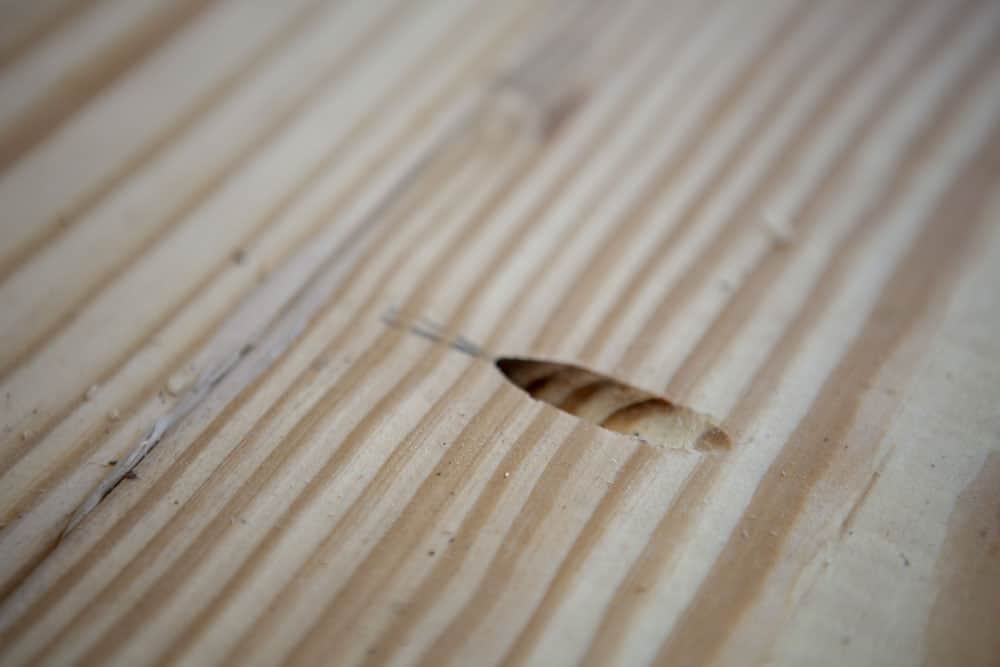 For the cabinetry, we opted for Ikea ALEX desk drawers. They were on sale and matched the clean lines we wanted. Two with just drawers and one with a filing cabinet built in. For paperwork and stuff. Cause I’m an adult, and adults sometimes have paperwork. While at Ikea we also got some crafty organizing stuff for Amanda’s portion of the office. Her side is very pretty as well as functional, and with 5 kids that’s a feat because they are all creative and crafty little kids, so she has everything from vertical file organizers to hooks and hangers for rulers and scissors etc. One of my favorite pieces was a Star Wars family portrait I created with some scrap wood, and some car decals my friend Jay Owen gave me one Christmas that we had left over. 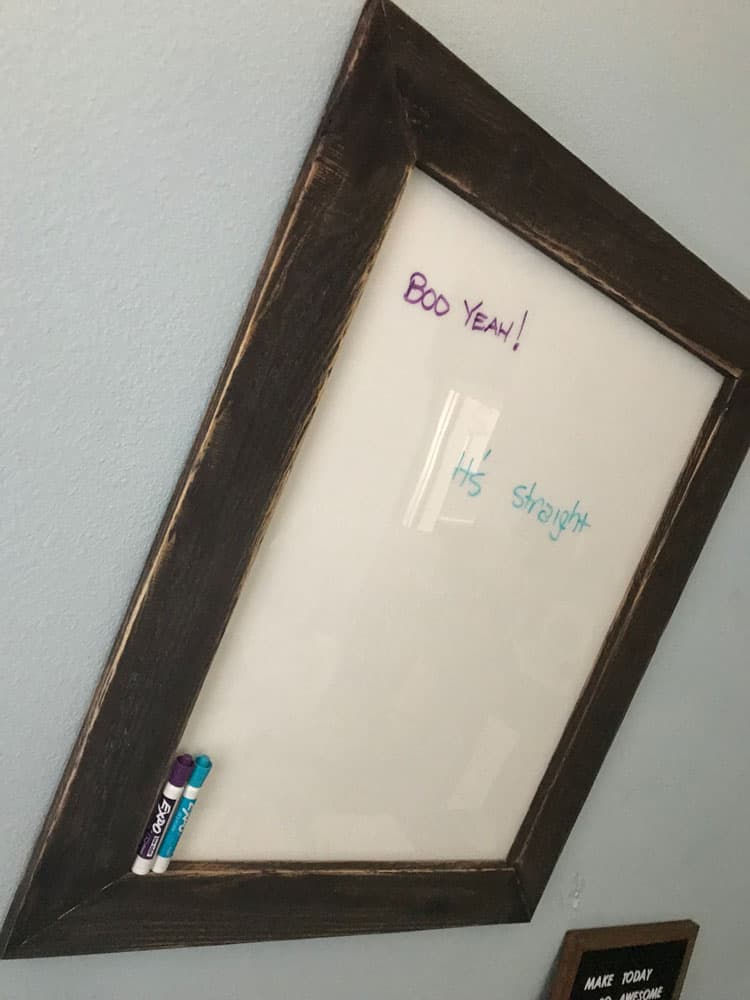 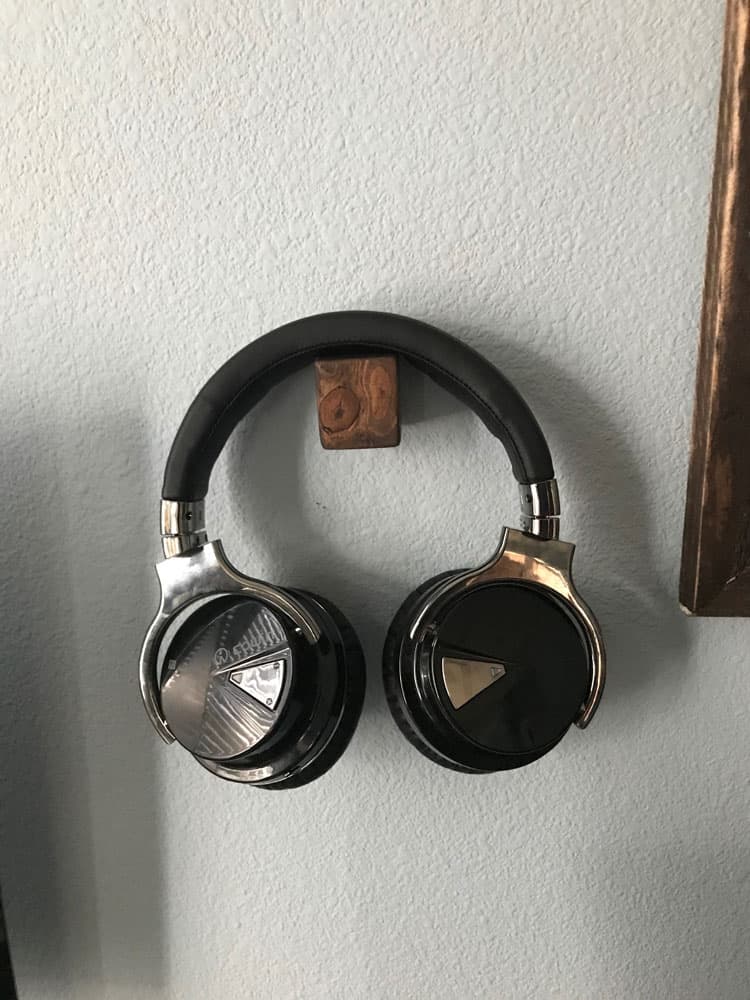 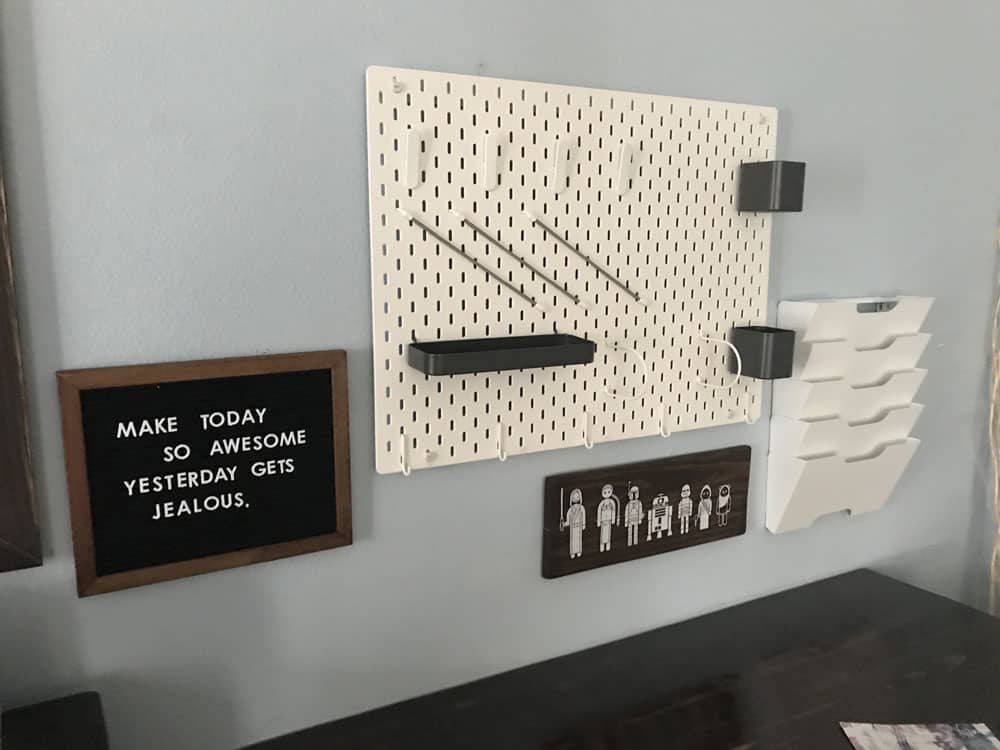 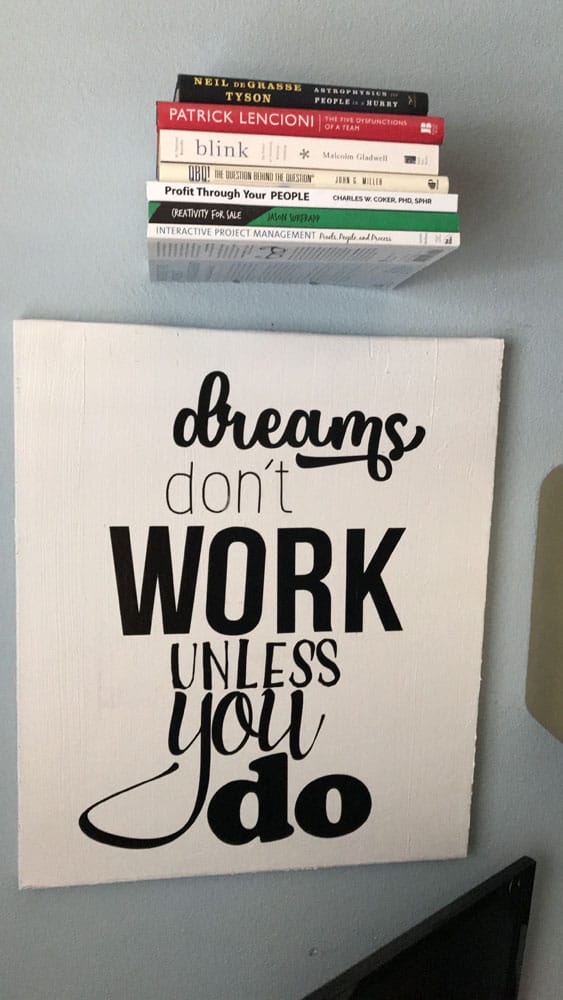 I made a wooden frame and thought I was being pretty smart by painting the backside of a piece of plexiglass and affixing it to the frame. So the front would be glossy and be like a whiteboard, with a cool custom wooden frame. Yeah that is until I wrote on it, left some funny message while we built other things, and then I came back to it, and it wouldn't erase. So suffice it to say I use sticky notes on it. It works, go with the flow. Amanda helped me make a cool quote piece with an old canvas and her Cricut cutter. She found some other pieces at Hobby Lobby, and we painted an old IKEA shelf we had in the garage. 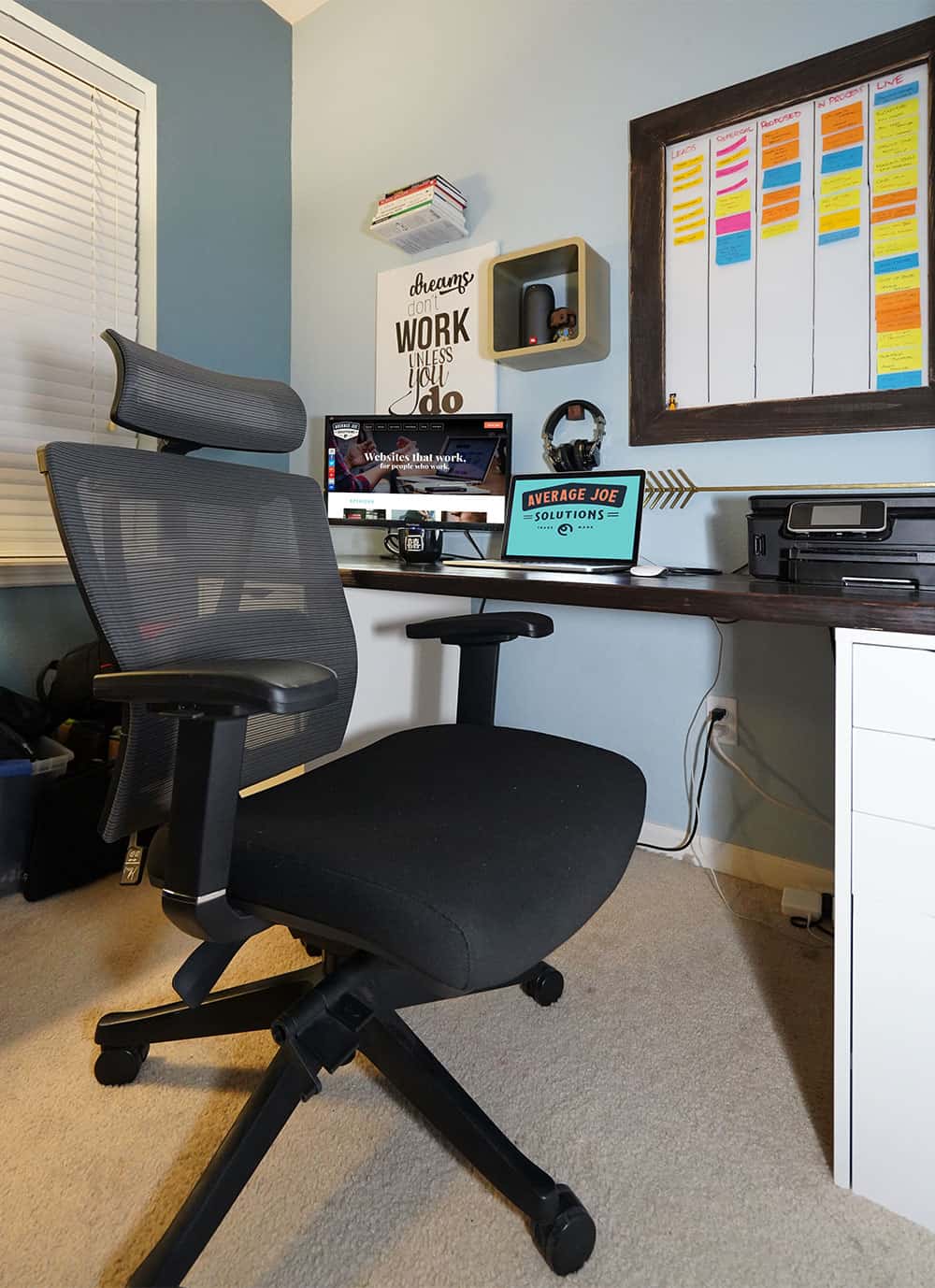 The one splurge item I did allow myself in all my frugality of building and repurposing, was a floating bookshelf. You’ll see in the pics, but it looks like books just floating on the wall, all by themselves. Always wanted one of those things. The one piece I still think I’m missing is the business logo. Kinda thinking I wanna custom route it out of wood, or laser engrave it, so if anyone has any great ideas lay ’em on me. Anyway, like always wish I had taken more pics of the desktop build as it was really enjoyable, and I think came together quite nicely. If I had to do it all over again, I would probably try to really soak and flatten the wood, and then use a planar or something to really minimize the gaps, and make a perfect connection between planks. 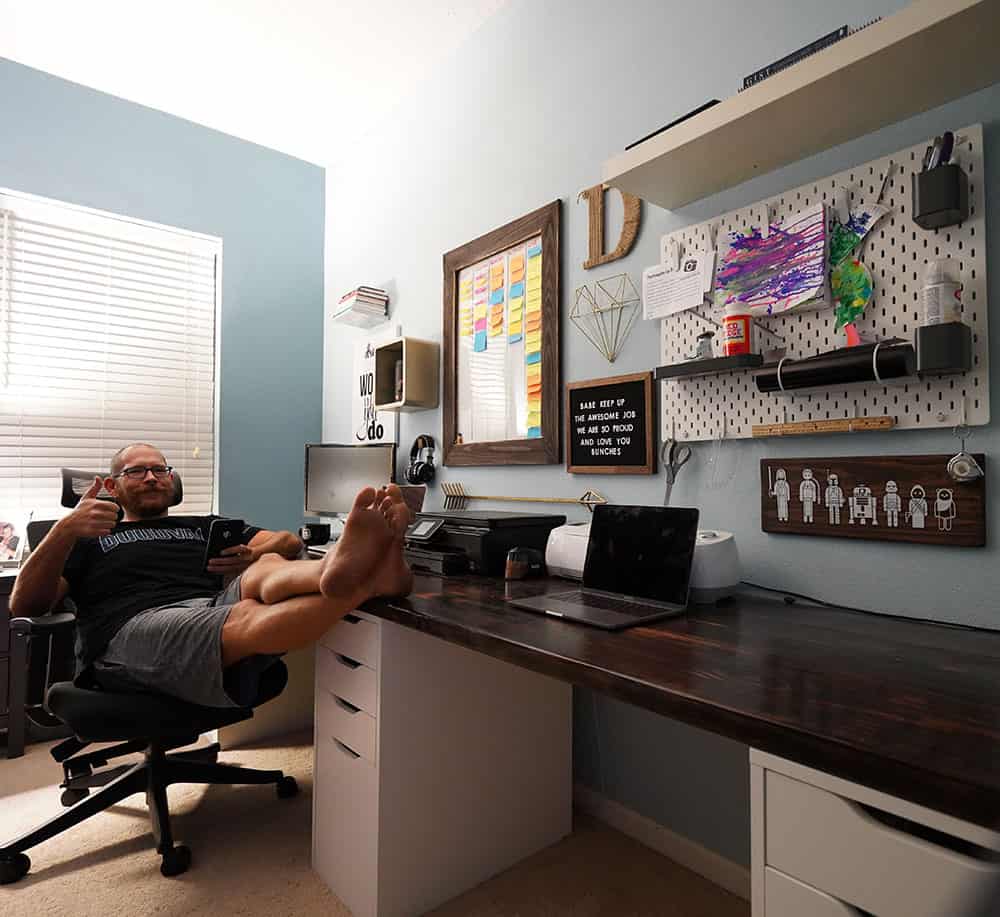 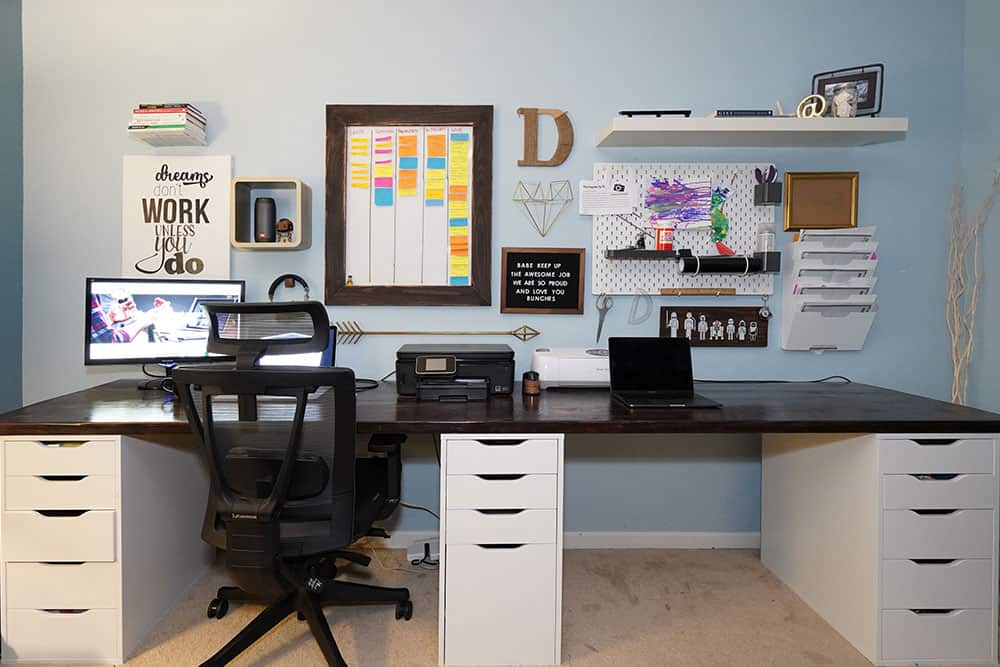